PREVALENCE, ASSOCIATED FACTORS AND AWARENESS OF BULLYING AMONG STUDENTS OF PUBLIC AND PRIVATE SCHOOLS OF LAHORE, PAKISTAN

Objectives: To find out prevalence of bullying, its associated factors and extent of awareness against bullying among th students of public/private schools of Lahore and to compare them.

Place and Duration of Study: Study was carried out in different schools of Lahore, Pakistan, from May to Nov 2019.

Methodology: A total of 294 students of public/private schools (8-10th grade students) of Lahore were recruited in study by purposive sampling. The students filled a pretested and pre-structured questionnaire consisting of questions about bullying, number of bullies, forms of bullying, its causes and consequences, reaction of students towards bullying and if anybody was informed about it.

Conclusion: Bullying is relatively more prevalent in public schools and predominantly manifested in the form of humiliating remarks & verbal abuse. Majority of students show no appropriate resistance towards the bully while bullying causes a critical psychological distress inthem. 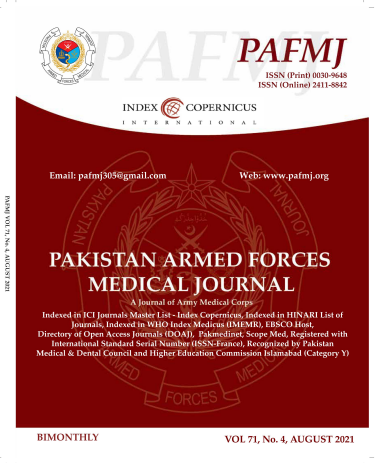